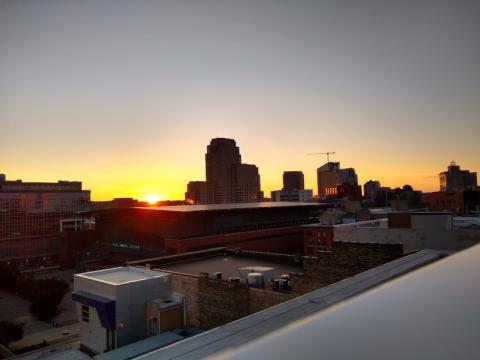 2020 has been a strange year; having an extended prologue and epilogue. It is a year that began sometime around the end of march and will conclude sometime in early November, unlike any other year I’ve experienced. The notion of this BLOG – attend some meetings, report on the coo andl the frustrating stuff which is happening [or not happening] – has not been a good fit for 2020. So, before whatever it is that happens next, a round-up seemed like a fun idea and a nice distraction.

As an approach to dealing with the COVID19 pandemic the city commission declared, and then extended, a “special event”. Currently the special event stretches from June 1, 2020 to May 31, 2021. Is this the longest special event in Grand Rapids history? This special event paved the way for a variety of [long overdue] adaptations which included outdoor drinking of adult beverages and closing street lanes to make additional outdoor seating for restaurants.

Here are some pedestrian count graphs from WOODTV8: 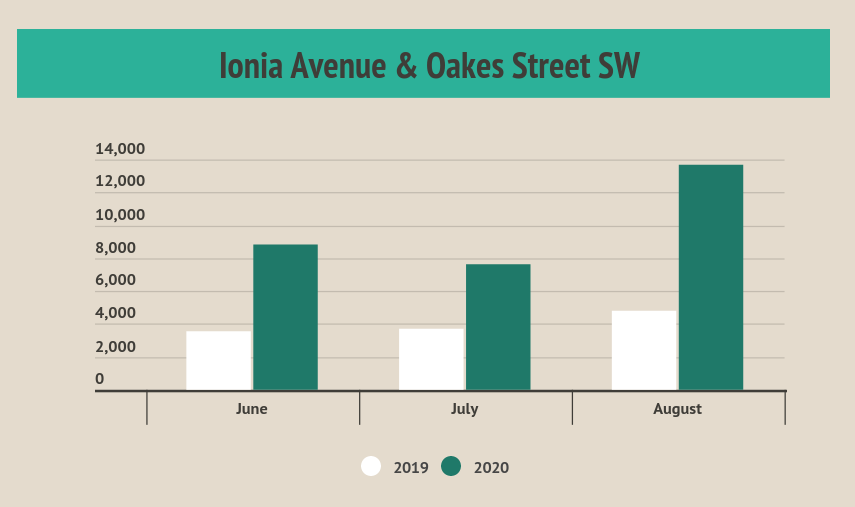 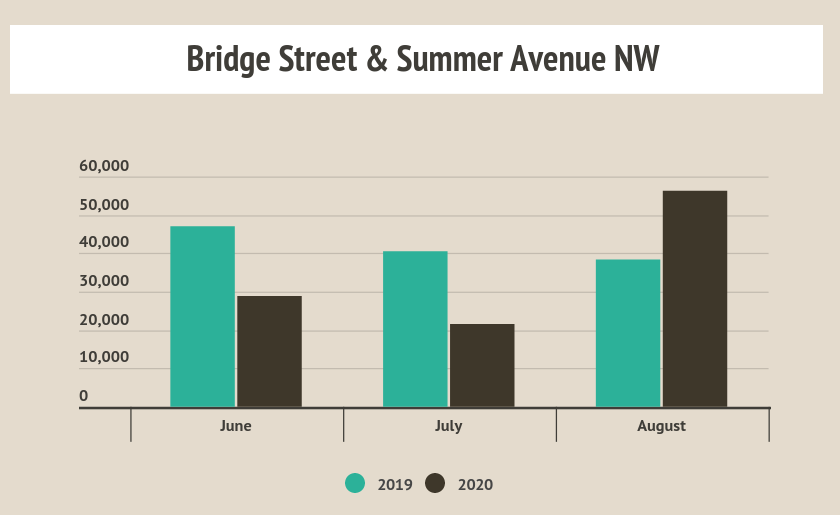 Look at that; humans, the alpha-species which emerged from the late Pleistocene ice ages, adapting! And now we head into the winter months to prove once and for all that: yes, people will go outside in the winter.

I hope this will also tamp down the tendency to exaggerate the severity of Michigan winters. Grand Rapids has exactly one month (January) with an average daily high temperature below freezing… by one degree. Western Michigan is temperate, not arctic; we can party all year long.

Measured against - which is the only fair benchmark - our unresponsive federal government and the churlishness of the Kent County Commission the response to the pandemic by the Grand Rapids' municipal government has been stellar.

Let’s hope the free wheeling spirit of the social zones, and less parking, and fewer %#%@*& lanes for traffic, becomes a new normal. Let’s not go back.

Looking closely at my own stomping ground - development has continued apace; and with some different products and emerging trends. Development has come to the north-west of the city, moving on from the red hot Bridge St. corridor. It has also given Monroe North a respite and pushed further into the north-east. I find development move up to Leonard to be encouraging. This means more potential customers for long standing businesses like Leyen & Son Meats [established 1939], Northwest Home Furnishings [established ~1935], Mieras Shoes [established 1922] as well as all the new comers. And none of this can be bad for the Grand Rapids Comedy Project. 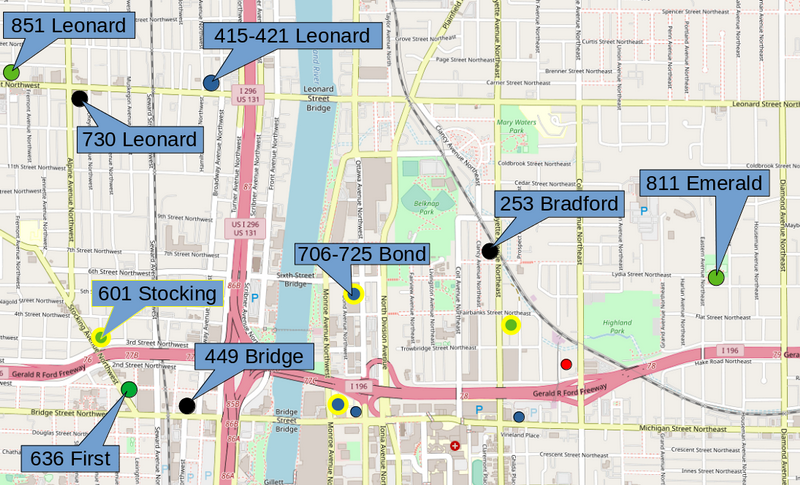 Bazzani Building Co has provided two of the most urban developments: 253 Bradford (Bradford Station) and 730 Leonard. Both developments feature very limited parking, bicycle facilities, and are transit supportive. These are some of the first truly urban-lifestyle developments anywhere in Grand Rapids. 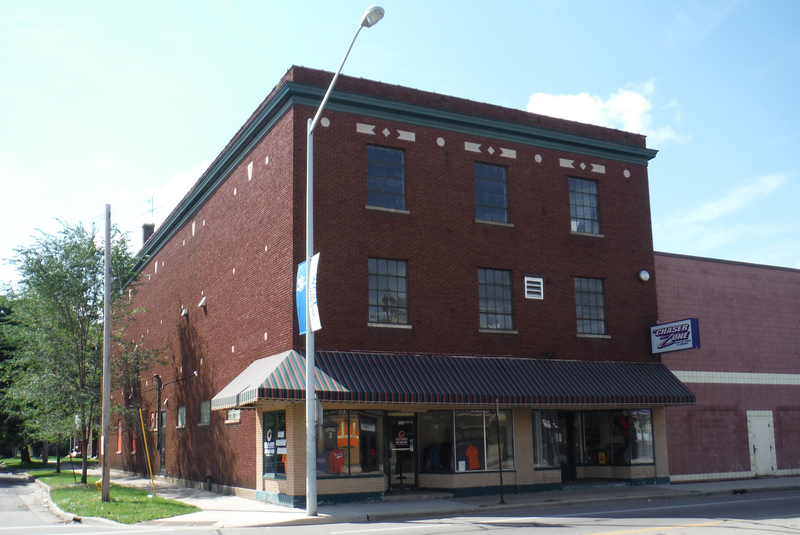 The building at 730 Leonard will have basement bike storage accessible by an elevator.

3Mission’s Bridge Street Lofts (449 Bridge St) 44 units provides no on-site parking. Planning Commission meetings are not known for their levity, yet if you can find the Facebook Live video of the developer saying “zero parking” over and over again until the Planning Director had to comment on it... that is gold. 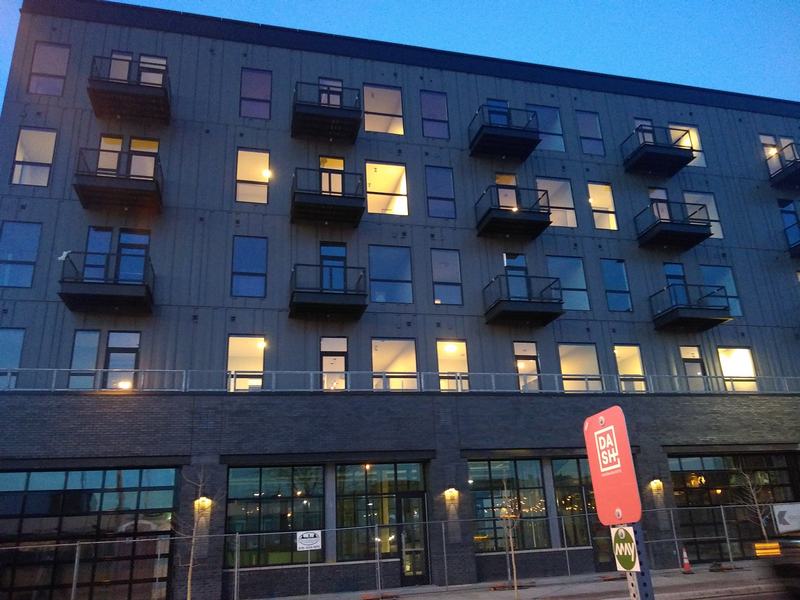 449 Bridge. The "no parking" development. 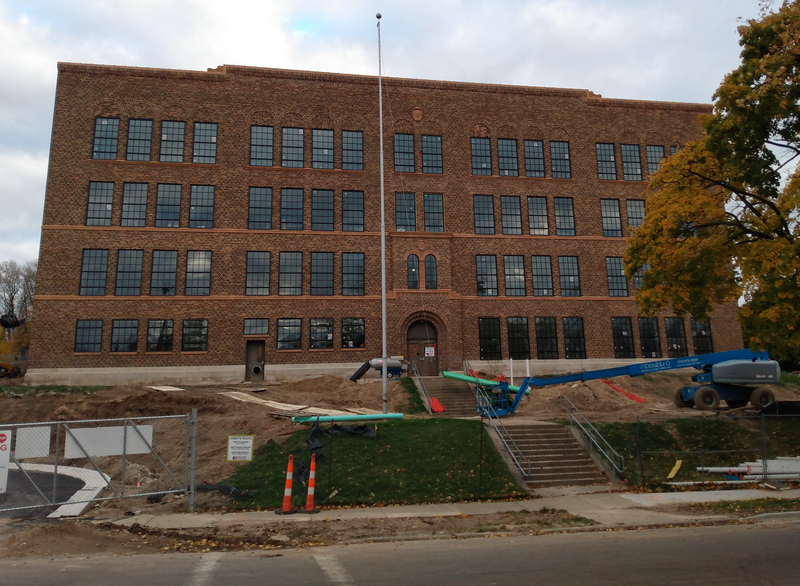 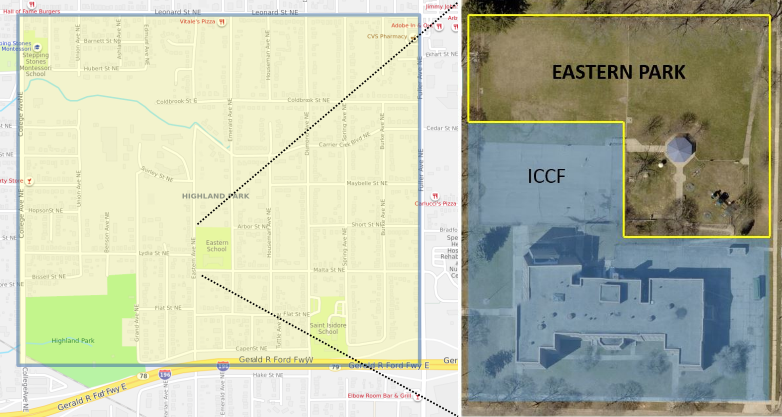 The addition of 193 units of Affordable housing is something to be happy about. Yet that stands in contrast to the mere 71 units of market-rate housing provided by these developments. This disparity is indicative of a housing market which is not healthy. The defectiveness of this market is made even more apparent when one goes on the search for infill development: duplexes, tri/quad-plexes, or accessory dwelling units. I managed to find one small-scale development within this same area. One. 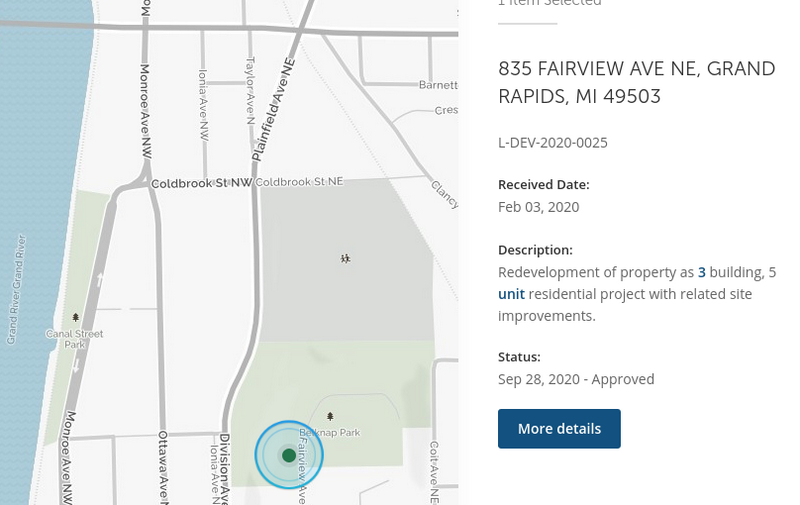 One lonely small-scale development. 2020 has provided ample evidence of the dysfunction of this market:

On the topic of housing 2020 has certainly been an interesting year. And a year which provided no answers. In many ways another year lost.

What a year it should have been; with “micro-”mobility, a new BRT, and ever improving bicycle infrastructure. Years of work culminated in 2020, to be over-shadowed by both COVID19 and the meltdown of national government. That makes now an excellent time to highlight the accomplishments.

First the small stuff which is easily overlooked yet experienced by its users every day: 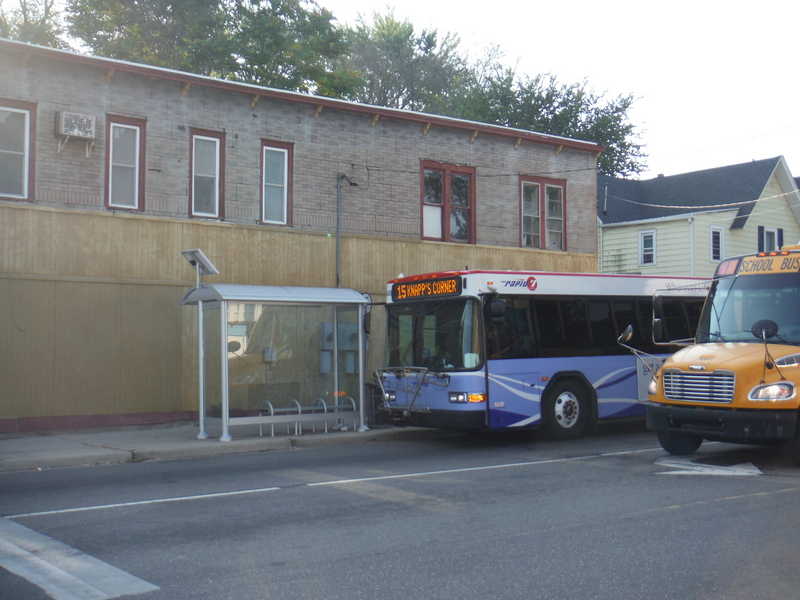 In September micro-mobility arrived; we got scooters. I have seen no data yet to cite but reports have been that they are very popular. I've used them. 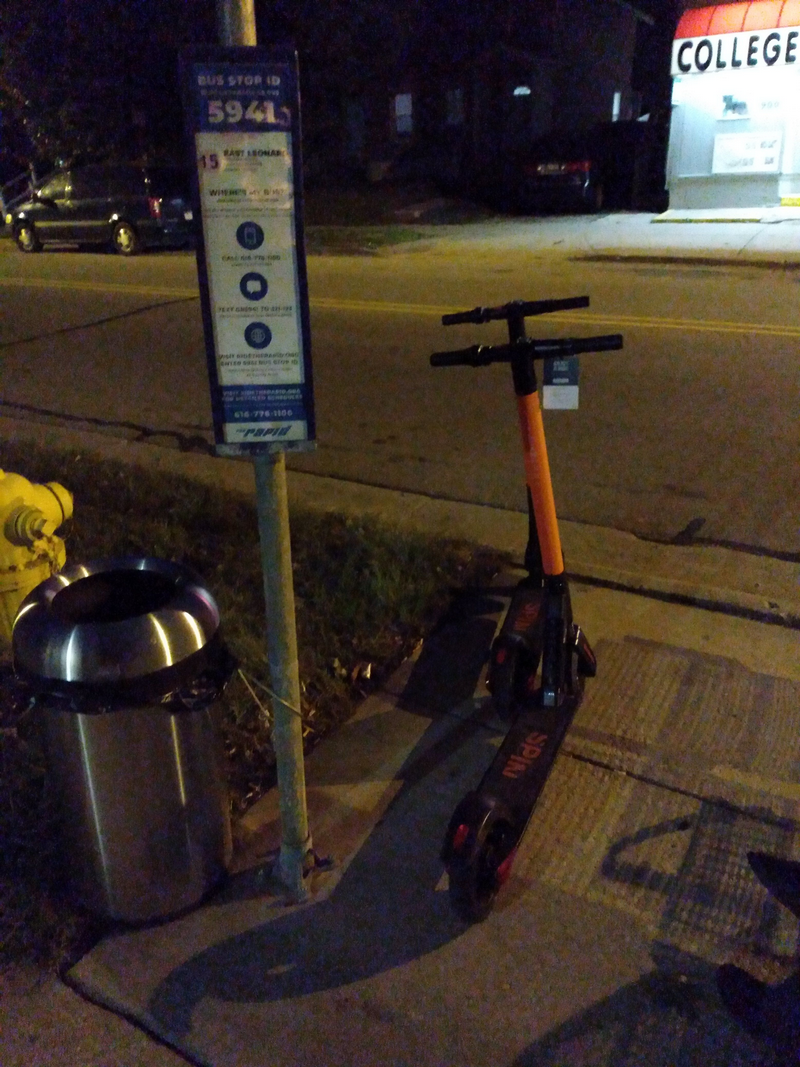 Electric assist bicycles will be here any day now. The COVID19 pandemic caused a nationwide shortage of e-bikes.

The big news of 2020 [pun intended] is Grand Rapids getting its first transit line featuring bendy boys : the Laker Line. Operation began on schedule in August, not the best time for a launch party. 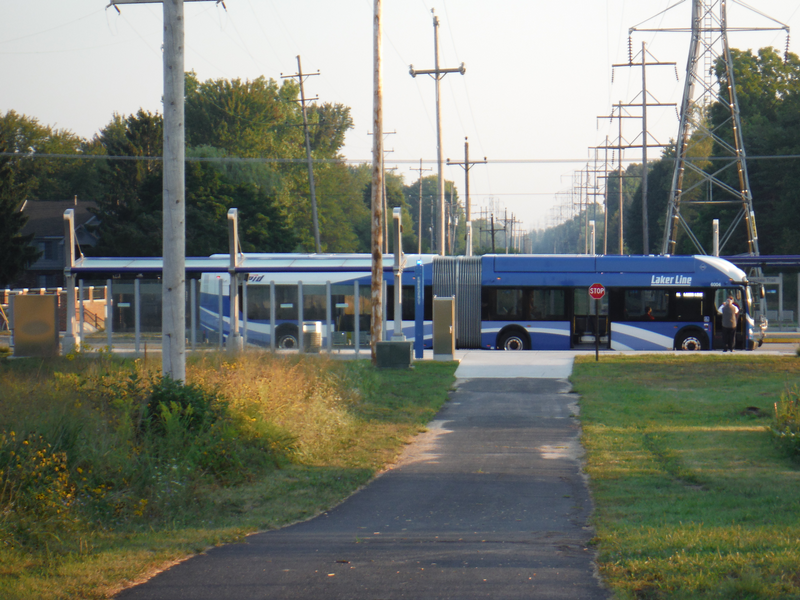 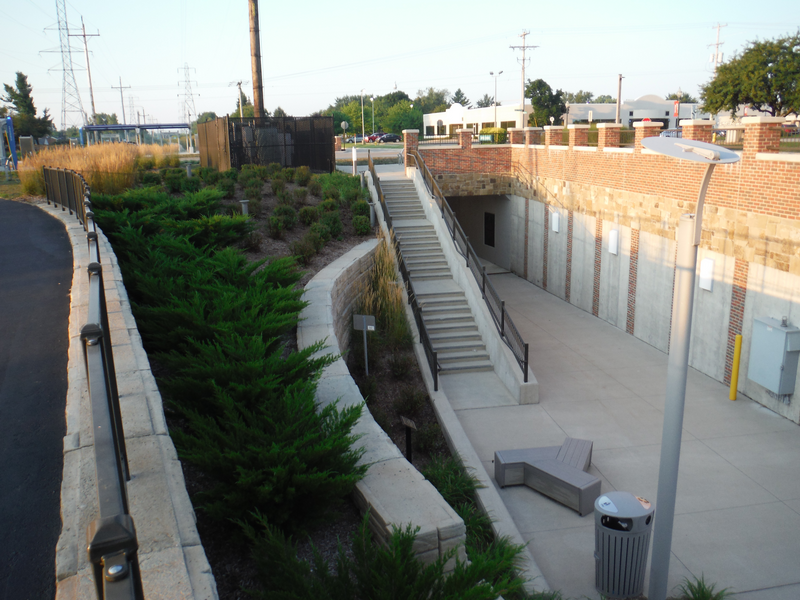 One criticism I've heard of the Laker Line is that it runs through a whole lot of nothing. When exploring the route it was easy to take photographs which look as if they belonged in one of Strongtown's many [so many] sprawl p0rn posts: 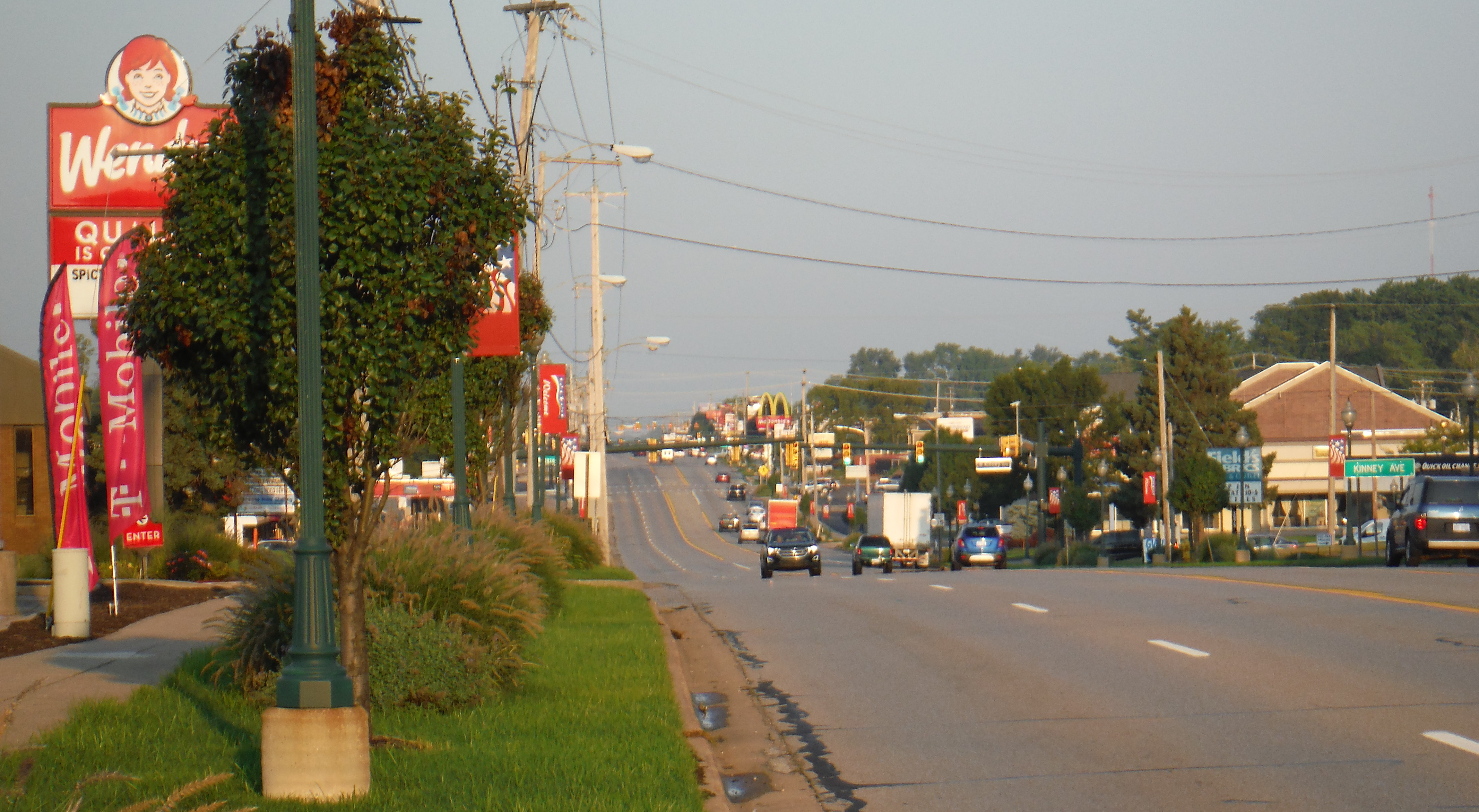 Fair point. Yet the conversations - or Zoom calls in 2020 - I have lurked in indicate to me that the leaders of these suburban communities understand the economic and ecological imperative of moving beyond sprawl. Unencumbered by established networks of neighborhood defenders I will not be surprised to see these communities leap frog Grand Rapids regarding policy reform.

Aside: Also at the Standale stop of the Laker Like is Dehops Brewing Co. Another brewery now easily available to Grand Rapids residents.

In less positive news has been the state and federal COVID response relative to transit: they've pretty much left it out in the cold. Meanwhile shoveling billions into the coffers of the airlines [when can we stop pretending these are private companies?]. Gov. Whitmer chose not to have a single transit, cycling, or pedestrian advocate on her "Council on Future Mobility”. Today there are no significant surface transportation projects, aside from widening of roads, in the pipeline anywhere in the state of Michigan. Nothing.

Faced with 20%-30% cuts in revenue the RAPID was forced to go back to the drawing board in their Comprehensive Operational Analysis. The currently proposed plan attempts to make the best of this sad situation, emphasizing frequent service on routes 2, 4, 9, 11, & 90 (Silver Line). 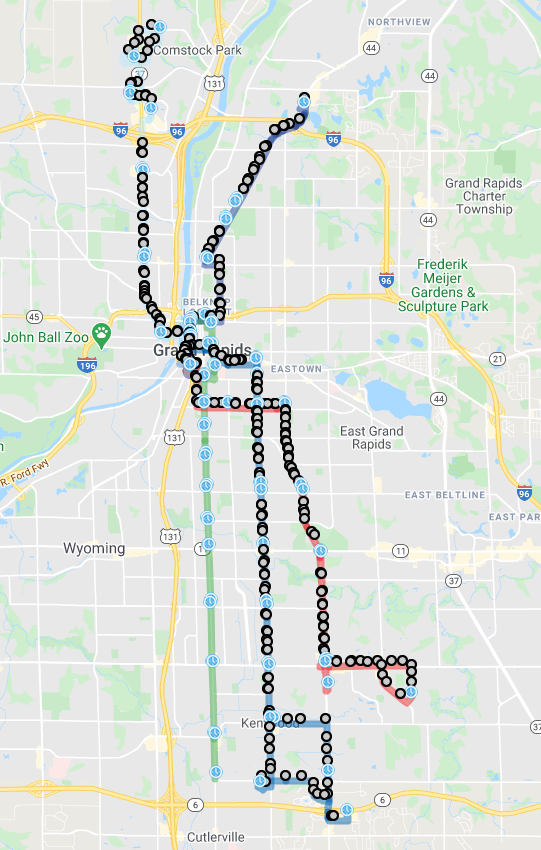 To end on a positive note: transit use in Grand Rapids has seen a strong rebound since the beginning of the pandemic. Grand Rapids ranks 6th in the nation for transit rebound, having increased 158% between March and August.

The most discouraging aspect of 2020 for me was how eagerly there was band-wagoning around the "COVID is the end of downtowns" meme. Something in American culture is so essentially anti-urban that even those who should know better - who have "Science is Real" yard signs - are ready to casually accept such an assertion sans any evidence; and contrary to ~10,000 years of evidence. Yet every time a lock-down cracked open people rushed out to bars, and parks saw a consistent stream of visitors. DGRi opened their new skate park downtown... 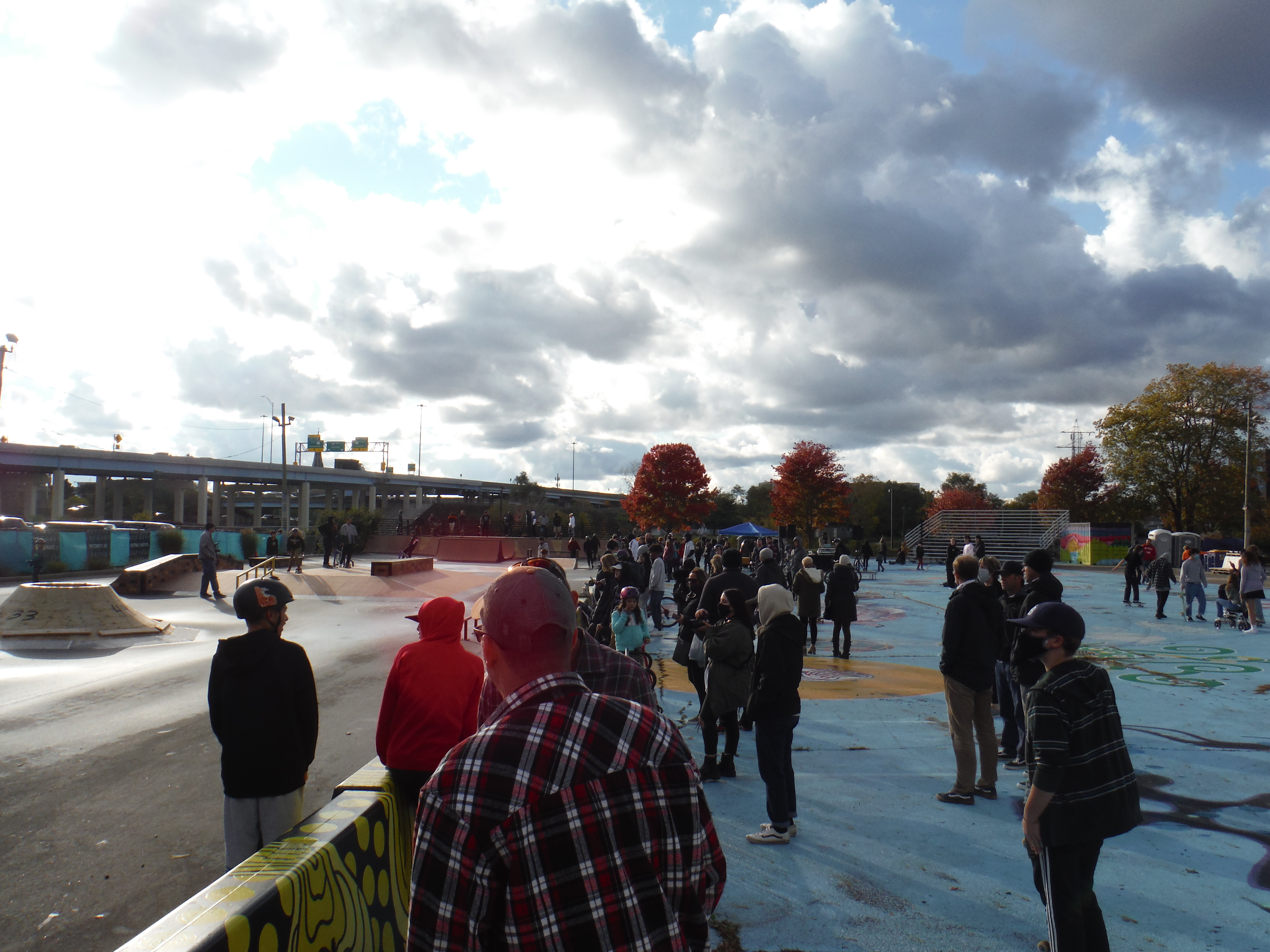 Nobody will go places anymore...

Urban property values have continued to climb. No significant change has occurred in relative sales of rural, suburban, or urban homes. Corporate HQs have continued their march into downtown, including the worldwide headquarters of Perrigo. Consumers Energy (West Michigan) and Acrisure are still in the process of their development. These are in addition to smaller firms like Paradigm Design.

The tower on the wedge lot across from Van Andel Arena is reported to be moving forward. (original story here)

Most importantly, last i heard the Brazillian Streakhouse is still a go!

By September it was obvious that the "death of downtown" was complete nonsense, density is still a moral and economic good, and cities are still the best places to live. 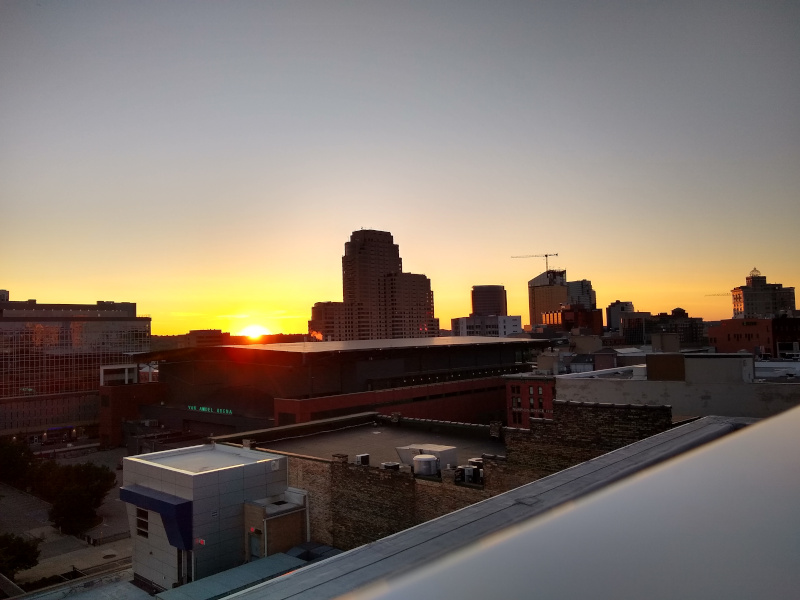 I don't know what happens next. That's OK, we'll figure it out together.