For Conversation: Highland Park has two parks, located on the west side of the neighborhood. It also has places which serve as pseudo-parks - open spaces which are not parks but which people often use in a park-life fashion. 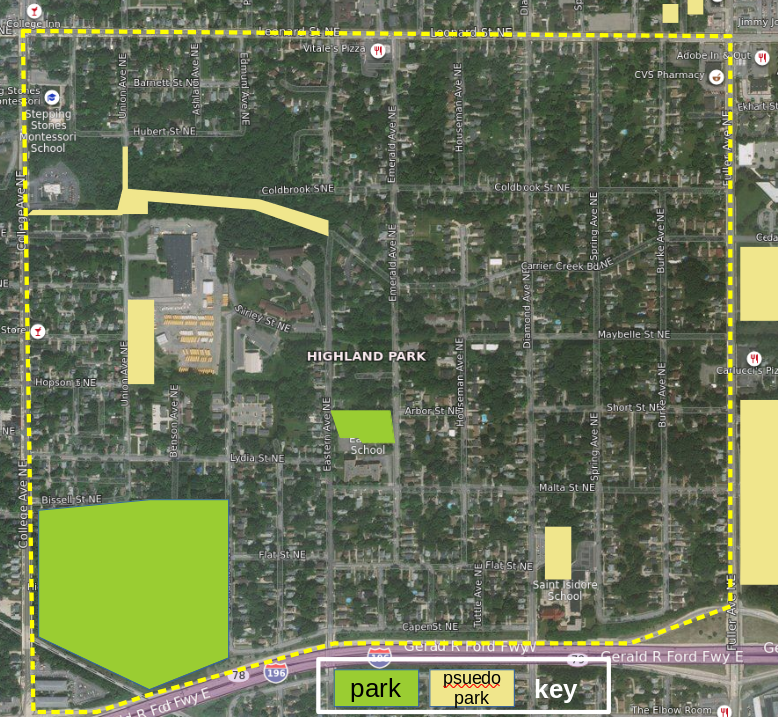 For perspective, the NE corner of the neighborhood is ~2,650ft from the nearest park, the SE corner ~2,450 ft, and the North ~2,100ft. The NW corner is pretty close to Mary Waters Park [off the map to the west]

Someone on Twitter pointed out the distance to Fuller Park: ~1,900ft. However, going to Fuller Park requires crossing Fuller Ave, which is a textbook example of a Strongtown's "stroad". It is understandable that most people would not want to do that on a regular basis. There is, however, the pseudo-park of Creston Christian at ~1,500ft; this only requires crossing Leonard, which is far less onerous.

The Gulch
The Gulch is a drainage area stretching from College Ave to Carrier Creek road. The eastern half of this ravine, starting at Union Ave to Carrier Creek Rd has a semi-maintained path. It is a goal of the Highland Park Neighborhood Association to see The Gulch preserved in some formal way; preferably with the trail maintained. There is infrastructure - including fire hydrants! :) - in the gulch along uncompleted paper streets. My fantasy map includes connecting that path all the way through to College Ave along the south end of the Alano Club property (1020 College Ave NE) - we will talk about that more in the Trails & Paths Fantasy Map.

How to make more official park space?
This is a tough question. As someone pointed out on Facebook the acquisition of property for park space is fraught and sometimes the creation of small parks is unpopular with the immediately adjacent neighbors. Without the buffer provided by a larger space neighbors may have legitimate concerns about noise and other nuisances. Also, the number of larger - say larger than a 1/2 acre - lots in the neighborhood is very small; and none of them are vacant. 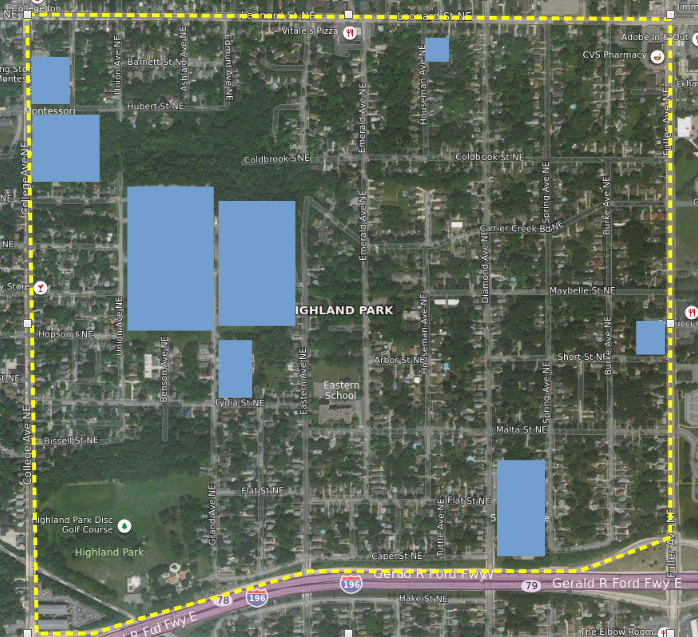 Large lots
Perhaps one idea would be to amend the land use code to allow park creation via a grant in return for some other benefit. Maybe if a large parcel turned over [its current use was abandoned] and acquired by a developer they could trade property for Zoning concessions? For example on a site over an acre a half-acre donated would zero out parking requirements and an additional story on buildings could be permitted for every 1/2 acre donated. To be meaningful the concession would have to be large enough, but an acre for not having to built parking and two additional stories might be enough; maybe? This is only one idea, creating more greenspace is going to take some creative wheelin'-n-dealin'.
An additional benefit to such a transactional idea would also have the benefit of situating new park space near the highest density development. Having higher density housing adjacent to the open space means there are always more eyes on the space.
We have an example of this form in the neighborhood currently with the redevelopment of the old Eastern School as Eastern Flats. The old playground was given to the parks department and the existing four story structure redeveloped. 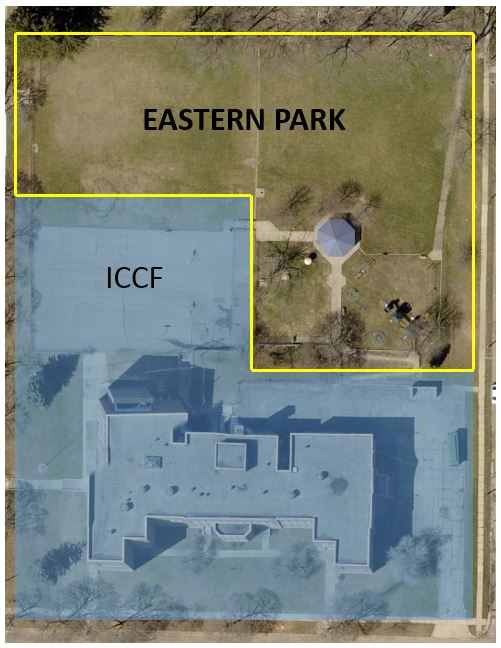 The division of the Eastern School property.

Even with such a theoretical policy there is the limitation that large lots are situated mostly on the west side of the neighborhood which already has significant park space.
This is a tough nut to crack.